With its tree-lined streets, sunny skies, and some of the best steak and Malbec you can find, it’s hard not to love Mendoza. Even so, we had heard mixed reviews about the Argentine region – mostly from Chileans, who will proudly insist that their country actually has the better wine. We decided to find out for ourselves.

We boarded a direct bus in Santiago to Mendoza. Six hours, countless switchbacks and a sluggish border crossing later, we arrived. As we hopped into a cab to head to our Airbnb, we were quickly reminded that the Argentine Spanish dialect has its own twist, having been influenced by French, Italian and other languages. Luckily, everyone we encountered was patient and kind. 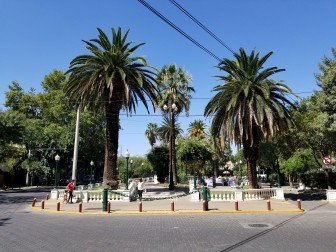 We knew we wanted to spend our four days in Mendoza wandering around the city’s main walking street (Sarmiento), eating steak and getting a crash course in Malbec. We learned that there are a handful of wine regions in the area, two of which are popular to explore by bicycle. We chose to visit Maipú, an historic area with about 20 wineries that’s easy to reach by local bus and has several bicycle rental shops. Most tours don’t require reservations, and with tastings averaging around 130 Argentine pesos (about $6.50 USD), Maipú is popular with the backpacker crowd.

Wanting to beat the heat, we got an early start and grabbed sandwiches at the market. We wore sun hats with chin straps, long shorts and plenty of sunscreen. (Side note: It’s best for women to avoid short shorts – unless you don’t mind catcalling!) Then, we walked to Plaza Independencia, near the center of the city, where we purchased a transit card at a convenience store with “Red Bus” signage. Buses in Mendoza are cashless but cheap, and the same card can be used by more than one rider if it has enough money on it. (The person selling you the card can tell you what a round-trip to Maipú costs. In March 2018, the cost was 4 Argentine pesos each way – only $0.20 USD!)

With our Red Bus card in hand, we walked to the Group 10 bus stop a few blocks away. Three buses – the 171, 172 and 173 – go to Maipú. Once on the bus, it took us about 35 minutes to reach Urquiza, the main drag where the bike-rental shops are located. If you’re not sure where to get off, just tell the driver Camino de Vino – he’ll know where you’re going. It’s also good to know which rental shop you are going to because they are not located right next to each other. The best-known shops are Mr. Hugo – where the driver may take you by default – Coco Bikes, BikesAndWines and Maipú Bikes. We had planned to go to Coco Bikes but couldn’t find an address online, so when two other tourists hopped off in front of Mr. Hugo, we followed suit.

Mr. Hugo greeted us right away. His wife offered us glasses of cold water and sat us down while she went over the winery map. Because they have been in business so long and are well-known in the small community, they were also able to tell us about special discounts and promotions at certain wineries. They were informative and not at all pushy.

Mr. Hugo sized us up, gave us our bikes, and handed us his phone number before sending us on our way. It wasn’t until we pulled onto the semi-busy main street that we realized he hadn’t provided us with helmets. Whoops.

With only one main road and a few side streets, the route was very straightforward. We started heading to the farthest winery, CarinaE, as we had read it’s best to ride the longest distance first, then make your way back as you imbibe. However, as we pedaled into wine country, the bike lane disappeared and the road narrowed. We found ourselves dodging big rigs, pick-up trucks and other vehicles, so we took a left turn onto Calle Perito Moreno, where we saw signage for three wineries.

As we pedaled out of the winery gates after our tasting, Jake noticed he had a flat tire. We took it slow to the next winery, family-owned Vina el Cerno. After chatting with the friendly daughter of the winemaker – who sells the wines along with her siblings – we sipped more fruity Malbec, bold Cabernet Sauvignon and extra brut sparkling wine. The winery was considerably sleepier and smaller than some of the others – the perfect place to wait for Mr. Hugo to arrive with a replacement bike. 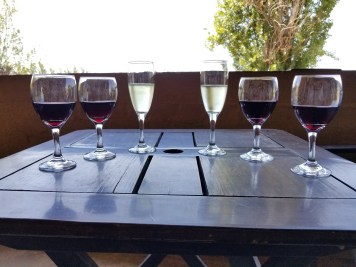 Sure enough, he did, and we were off again. We headed down the road and across the street to Tempus Alba, a micro winery with a beautiful terrace that overlooks the vineyards and olive orchard. As the afternoon heat set in, we tasted plummy Malbec, sweet-and-savory Tempranillo and harmonious Merlot. 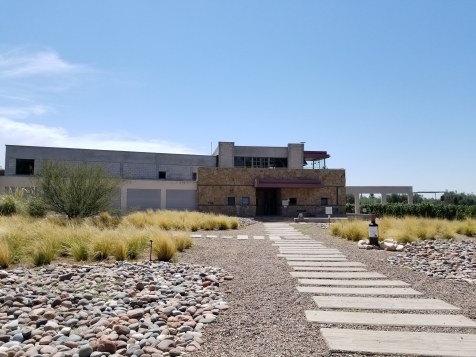 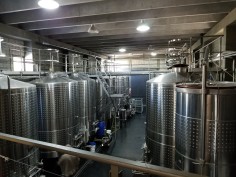 At this point, we were feeling the sunshine and the wine, so we started to head back to Mr. Hugo to drop off our bikes. Had we had more than one day to explore the vineyards – and the willingness to brave the busy street – we also would have visited:

At the end of the day, we were glad we explored Maipú by bicycle, even though the road was a bit dicey at times. Had we not been on a backpacker’s budget – and had we had more days – we probably would have hired a driver, taken a few guided tours, and explored Mendoza’s other wine regions. Next time.